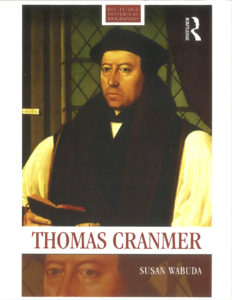 This week sees the publication of Professor Susan Wabuda‘s new study of the life and career of the archbishop of Canterbury Thomas Cranmer (1489-1556). Professor Wabuda was interviewed by the book’s publisher Routledge and you can read that interview on their website. We took the opportunity to ask Professor Wabuda some questions of our own about how the new book relates to her earlier research and the ways that it intersects with her teaching and other projects at Fordham.
The story of the book:

Wabuda told us that toward the end of 2010, the British publisher Routledge approached her to write a new biography of Thomas Cranmer, the sixty-eighth archbishop of Canterbury, for the Routledge Historical Biographies series.  A that point, she was already deep in a draft of another book, a new study of Cranmer‘s Cambridge colleague Hugh Latimer, but Routledge’s invitation made her realize that it was possible to let each project inform the other.

Thomas Cranmer  is meant to be an engaging and highly readable account of the archbishop’s life.  Although he is a familiar figure in Tudor history,  in her research Wabuda was able to discover aspects of his career that now can
be known for the very first time. In particular, she was fascinated by the earliest expression of evangelical reforms at the University of Cambridge in the sixteenth century, which she was able to refer to briefly in Thomas Cranmer.  The next book will explore in detail the leading role Latimer had in the Reformation in England. 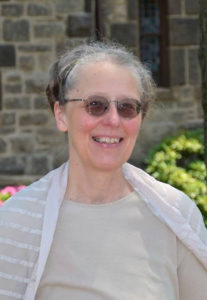 How the book relates to teaching and other projects at Fordham:

October 2017 marks the 500th anniversary of the release of Martin Luther’s Ninety-Five Theses, one of the great watersheds in the history of the West. Wabuda looks forward to the graduate class she will teach this fall (2017) on Luther and the Reformation. This graduate class will doubtless be fascinating, but Wabuda also offers regular undergraduate classes on Tudor and Stuart England, the Renaissance, and the English Reformation.

It is exciting to lead class discussions on Henry VIII’s many marriages and the political and diplomatic problems that England and western Europe faced in the early modern period.  Wonderful guest speakers come to my classes,  most frequently Arthur L. Schwarz of New York’s Grolier Club, who speaks on rare books of the sixteenth and seventeenth centuries.   A number of international scholars have delivered  the St. Robert Southwell, S.J.  Lecture at Fordham University, which I administer. Our speakers have included Susan Brigden (University of Oxford), Peter Marshall (University of Warwick),  Andrew Pettegree (St Andrew’s), Miri Rubin (Queen Mary University of London), and  Bill Sherman (the new director of the Warburg Institute in London).