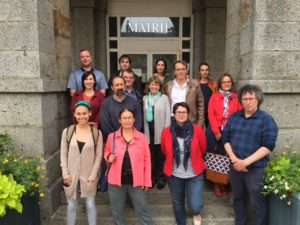 Graduate students Rebecca Bartels, Toby Hrynick, and Thomas Schellhammer and Professor Rosemary Wakeman spent 3 days in June in the French town of Domfront in Lower Normandy. The stay was organized by Mayor Bernard Soul of Domfront and Eric Fauconnier of the Pays du Bocage Region. Domfront is a picturesque medieval town that played an important role in the wars against the English and the French Wars of Religion. Domfront’s well-known chateau was used by Henry, the youngest son of William the Conqueror to rally the local lords. He eventually became Duke of Normandy and Henry I of England. Domfront’s “Medieval Fair,” held each August, is among the most well-known in France and attracts thousands. END_OF_DOCUMENT_TOKEN_TO_BE_REPLACED 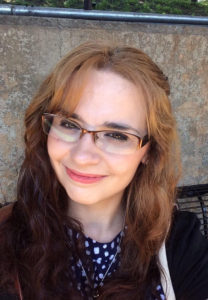 Congratulations to Christine Kelly on being awarded the 2017-18 GSAS Higher Education Leadership Fellowship. The fellowship is designed as a collaborative mentorship for PhD candidates, through which the fellow engages with GSAS administration to learn the ins-and-outs of higher education administration and while providing their own ideas and insight into the graduate school to help better GSAS. END_OF_DOCUMENT_TOKEN_TO_BE_REPLACED

Congratulations to Pedro Cameselle who has recently accepted a position as Assistant Professor at Western Washington University! Dr. Cameselle completed his dissertation, “A Forgotten Neighbor: The Challenge of Uruguay-United States Relations during the Era of Franklin Roosevelt, 1929-1945” at Fordham in 2016. END_OF_DOCUMENT_TOKEN_TO_BE_REPLACED

Comments Off on Congratulations to Alumnus Dr. Pedro Cameselle

In the Fordham History Department the month of August is often a quiet time, but the department came back to life with excitement as two doctoral students defended their dissertations after years of research, writing, and revision. The History blog congratulates Elizabeth Kuhl and Jonathan Woods, who both successfully defended in the past few weeks. END_OF_DOCUMENT_TOKEN_TO_BE_REPLACED