Current doctoral student, Glauco Schettini, has published an article in the journal for the Association for the study of Modern Italy. He has written a description of his work available below!

My article, titled “Building the Third Rome: Italy, the Vatican, and the New District in Prati di Castello, 1870-1895” and published in Modern Italy(Cambridge University Press), explores the creation of the new district of Prati di Castello in late-nineteenth-century Rome. 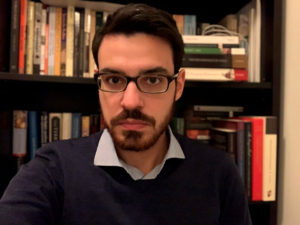 Rumor has it that Prati, the area north-east of the Vatican, was intentionally designed so that walking through the streets, one can never catch sight of St Peter’s dome. In effect, millions of tourists bound for St Peter’s Square can notice that until they come in sight of the Vatican walls, Michelangelo’s massive piece of architecture stays hidden behind the buildings, so I was curious to discover whether there was some truth in the rumor—which as a child growing up in Rome, I heard repeated many times. Gathering documents from several archives—including the municipal archive of Rome, the Italian National Archives, and the archive of the Bank of Italy—I unearthed a fascinating story. While there is no evidence that the rumor is true, Prati di Castello was one of the battlefields of the “culture wars” between the Catholic Church and the newborn Kingdom of Italy. Although in 1870 it was just an area of meadows, Prati had a strong political identity because of its physical proximity to the Vatican. Thus, it soon emerged as a political landscape in which competing powers articulated their aspirations and values, negotiated their respective authorities, and transmitted political ideas. The decision to create a new district in the area, which was made in the early 1880s, reflects the wider shift of Italian politics from the liberal notion of “a free Church in a free State” to the more combative anticlericalism of the Left. Well before its reshaping under the Fascist regime, thus, the urban fabric of Rome had already become a symbol of national ambitions and values. Although Romans today are hardly aware of the history of Prati, a trace of it survives in the innocuous form of a rumor.

I wrote the paper on which this article was based for Dr. Wakeman’s class (“European City: 1700-2000”) in Fall 2016, during my first semester at Fordham. A revised version of my paper was awarded the 2017 Postgraduate Essay Prizeby the Association for the Study of Modern Italy (featured on this blog as well). The article is available here.

Comments Off on Graduate Student Publication: Glauco Schettini and “Building the Third Rome”