From June 18-20, Patrick DeBrosse and Ronald Braasch participated in the Fourth International Symposium on Crusade Studies held at Saint Louis University (SLU). The symposium brought together a broad range of experts on the crusades, from several different disciplines, and featured plenary addresses by prominent crusade historians Dr. Cecilia Gaposchkin and Dr. Jonathan Phillips.

On June 18th, Patrick DeBrosse presented a paper entitled “Vituperium potius quam laudem meretur: Conrad of Montferrat’s Royal Ambitions,” in which he argued that Conrad’s motives, during the Third Crusade, require reassessment. Patrick’s argument relied on his own translation of The Song of the Siege of Acre (published on crusaderstates.org), a critical –but never-before-translated–  Latin source for the crusade. 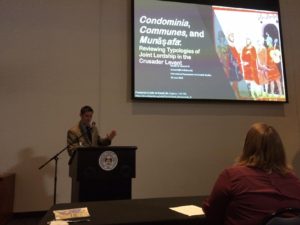 Ron Braasch presented his paper, “Condominia, Communes, and Munāṣafa: Reviewing Typologies of Joint Lordship in the Crusader Levant,” on the final day of the symposium. In this paper, Ron argued that the terms Condominia and Munāṣafa are insufficiently precise to capture the complicated changes that took place within patterns of joint lordship in the Latin East. Ron also networked with several military historians who attended the symposium, and discussed his recent article, “The Skirmish: A Statistical Analysis of Minor Combats During the Hundred Years’ War, 1337-1453.” Journal of Medieval Military History XVI,  (June, 2018): 121-156. 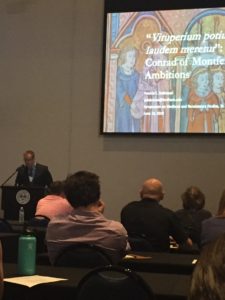 Ron and Patrick were not the only Fordham students at SLU that week. This year, the university held the Crusades Symposium in conjunction with its Sixth Annual Symposium on Medieval and Renaissance Studies and its Forty-Fifth Symposium on Manuscript Studies. Alexander Miller, a PhD candidate in Theology, presented “Visualizing the Pastoral Rule: The Life of Benedict” for Medieval and Renaissance Studies; while Medieval Studies students Stephen Powell, Michael Weldon, and Kevin Vogelaar presented papers in a Manuscript session entitled, “Nostalgia and Memory Creation in Medieval Manuscripts,” organized and chaired by Fordham’s Dr. Susanne Hafner. All the papers were favorably received, and the SLU community was extremely hospitable: Dr. Thomas Madden and Dr. Susan L’Engle courteously extended invitations to the Fordham students for post-conference events, and SLU allowed Kevin to spend several days in their archives after the conference, to examine a Syriac Life of Alexius and The Book of the Bee. 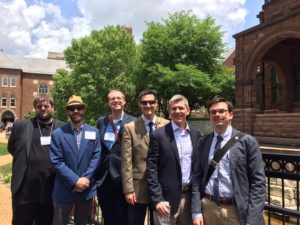