Christine Kelly, a PhD candidate in History, recently published an article titled “Folk as the Sound of Self-Liberation: The Career and Performance Identity of Odetta,” based on her dissertation research. Christine shared with us the abstract for the article: 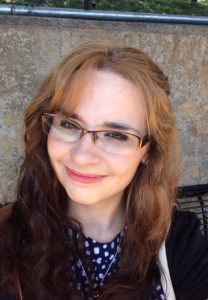 Odetta Felious Gordon Holmes – commonly known by her stage name, “Odetta” – played an instrumental role in the rise of American folk music as a mouthpiece for dissent during the social movements of the post-war era. She abandoned a life she planned in opera and oratorio for a career as an interpreter of African American slave songs and spirituals, material originally recorded by song collectors John and Alan Lomax in travels through the Mississippi Delta region. Odetta has claimed that while a life in oratorio would have enriched her vocally, its musical lineage had “nothing to do” with her experience. In contrast, a new repertoire of songs she gathered – songs derived from slave laborers, prison chain gangs, longshoremen, and church congregations – allowed her to shape her identity as a performing artist in crucial ways throughout her fifty year career. As a folk singer, Odetta co-constructed a cultural movement which drew inspiration from song writers of the past – composers of “freedom hymns” – to seek liberation in the present. For Odetta, such liberation was, at first, primarily for herself. As an African American woman who suffered the indignities of segregation, she felt she carried a “dragon” inside, one that hated herself and others. With a broad, black body of which she was ashamed, on stage Odetta tried to conceal and neutralize herself as a racial and gendered subject as she donned long, dark clothing, and threw herself fully into the material she performed. Through an act of self-abnegation, she performed the music, often of black men, who insisted on affirming their existence, the validity of their subjectivity, despite the oppressions that came with circumstances they faced involving humiliation and forced confinement. As an arbiter of the folk tradition, Odetta offered her body as bridge to connect a new generation of listeners with marginalized experiences of the past. As such, Odetta became a cultural broker of a folk tradition of dissent. She relied on a common method among performing artists – benefit concerts – to raise substantial funds for civil rights causes. Odetta’s life in music became a site of self-emancipation as she transformed from a suffering artist who often behaved subserviently to one who invented an identity which insisted on her own personal dignity. Furthermore, the exposure she gave her listeners to a nearly forgotten black cultural heritage enabled them to empathize with the experience of past singer-songwriters, seeing injustice in the present as more pressing than before. Odetta’s appeal to the idiom of folk and the benefit concerts she held directly supported the civil rights movement and related social mobilizations through the 1960s and 1970s as she helped to inspire not only political and legal change, but freedom in the arena of culture and emotion.

Comments Off on Graduate Student Publications