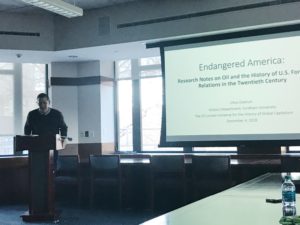 Dr. Dietrich’s research on U.S. foreign oil policy and domestic culture has been, in his own words, “driven by stories found in the archives.” He has seen fear as a driver in U.S. foreign relations over the course of the 20th century and his research shows the vulnerability of lawmakers to that fear. Dr.  Dietrich has used the sources of the Library of Congress and the Hoover Institute at Stanford University to analyze  the early 20th century open-door expansion for American business that oil provided. His research shows the permanency of wartime measures and protection of the economy by military endeavors in the mid-2oth century. Dr. Dietrich spoke about methods of archival research and his travels around the country to search through presidential libraries. 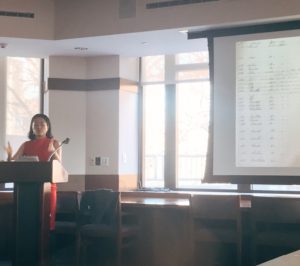 Dr. Yuko Miki, who published a book earlier this year, spoke about her research and the “nitty gritty of archival work,” which took her to Lisbon this past summer. Her work focuses on slavery and other forced labor regimes in 19th century-Brazil. She offered plenty of advice to graduate students, which included the successes that come from sharing sources with other scholars and the benefits of “reading across archives and languages” because sources, especially those made by the government, regarding slavery and abolitionism were often created for a specific audience. Dr. Miki’s archival research for records of ‘illegal slavery’ resulted in official records of captured slave ships mostly of Portuguese origin, but she advised the audience that source material for ‘illegal slavery’ has been at the receiving end of archival destruction, deception and suppression. In a discussion of slavery and capitalism, Dr. Miki tells us that it “should go beyond financing and into the humanity of the people being taken captive,” many of whom were given Portuguese names when they are taken as wards of the state after being ‘freed’ from slave ships docking in Brazil.

The O’Connell Initiative Luncheon always comes with a captivated audience and their next event highlights Kirsten Swinth and her new publication called Feminism’s Forgotten Fight on January 28th, 2019, at Fordham’s Lincoln Center Campus.