From Resettlement to Revolution: The Comuneros of Peru
Thursday, March 26, 3:20-4:40 TIL-246 Livingston Campus (Rutgers University)

In the sixteenth century, indigenous Andeans in the Viceroyalty of Peru were forcibly removed from their villages by Spanish colonizers and resettled in planned, self-governing towns. Rather than conforming to Spanish cultural and political norms, indigenous Andeans adopted and gradually refashioned the religious practices dedicated to Christian saints and the civil institutions imposed on them, in the process producing a new kind of civil society that merged their traditional understanding of collective life (the ayllu) with the Spanish notion of the común to demand participatory democracy. This hybrid concept of self-rule spurred the indigenous rebellions that erupted across the Andes against Spanish rulers and native hereditary nobility. Re-examining the era of the Great Rebellion through the letters and documents of the Andean people themselves, while eschewing a focus on well-known leaders such as Tupac Amaru, this presentation examines the community-based democracy that played a central role in the Age of Atlantic Revolutions and continues to galvanize indigenous movements in Bolivia today.

Comments Off on Prof. Sarah Elizabeth Penry’s forthcoming Book Talk, “From Resettlement to Revolution: The Comuneros of Peru,” at Livingston Campus (Rutgers University) 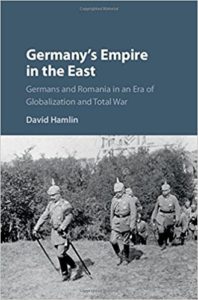 Big news from Fordham History’s Professor David Hamlin!  On 13 July, Cambridge University Press published  Germany’s Empire in the East; Germans and Romania in an Era of Globalization and Total War. Where many studies of European empire in the twentieth century focus on imperial projects in the global south, Professor Hamlin’s book demonstrates the place of central and eastern Europe in that story and the important role of economic forces played in shaping global empires. The book tells how the Germans, when “confronted with the global economic and political power of the western allies…  turned to Eastern Europe to construct a dependent space, tied to Germany as Central America was to the US.” We reached out to Hamlin for some comments on the process and how the ideas for the book emerged. END_OF_DOCUMENT_TOKEN_TO_BE_REPLACED