The article focuses on Nicola Spedalieri’s On the Rights of Man (1791) and on the debate that its publication sparked in Italy and beyond. The outbreak of the French Revolution in 1789 and the polarization of public opinion between the supporters of the new regime and its relentless opponents convinced Spedalieri (1740-95), a well-reputed Catholic theologian, of the need to find a via media between these two extremes. Assuming the re-Christianization of the postrevolutionary world as his goal, Spedalieri argued that some aspects of revolutionary political culture (representative institutions, the idea of a social contract, the notion of human rights) were acceptable from a Catholic standpoint as long as the revolutionaries, in turn, agreed to abandon secularization and to uphold the traditional confessional organization of the state, recognizing Catholicism as the official state religion. It was not modernity itself, Spedalieri claimed, that should be rejected, but secularization, for a different modernity from that conceived by the revolutionaries was possible—a confessional modernity, combining revolutionary politics and confessional states. Far from gaining immediate acceptance, Spedalieri’s ideas were harshly criticized during the 1790s and then set aside by the triumph of reactionary Catholicism during the Restoration. However, they resurfaced later in the nineteenth century and ultimately played a decisive role in the development of the church’s attitudes toward modern culture, for they carved a path for Catholics to fight secularization from within and to reshape modernity accordingly.A free online version of the article is available here.

Comments Off on Graduate Student, Glauco Schettini, publishes in the Journal of Modern Intellectual History 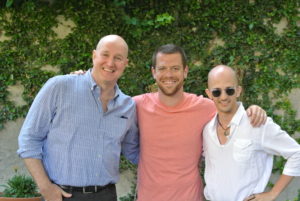 The History Department’s own blog contributor and MA student, Martin Nelson, spent the beginning of his summer helping the Fordham Classics Department guide a study tour that explored ancient Roman sites in Naples, Ostia, Herculaneum, Pompeii, and, of course, Rome. As part of the blog’s Postcard series, he had this to say about the experience… END_OF_DOCUMENT_TOKEN_TO_BE_REPLACED

Comments Off on Postcard from Italy Join the History Department’s Graduate Student Association at their Research Seminar on Monday, November 23 at 4:00 pm in Keating 105.  Alessandro Saluppo will present on his doctoral research: “Violence and Terror: Imaginaries and Practices of Squadrismo in the Province of Ferrara, 1914-1922”

Alessandro’s dissertation provides a new and innovative reading on fascist violence by examining the violent practices of Ferrara’s fascist squads, which pioneered the methods of agrarian Squadrismo and earned a reputation for extreme brutality during the fascist rise to power (1921-1922). Drawing on the phenomenological program of social science research on violence, studies on the anthropology of violence and the most recent praxeological approaches to Fascism, the study concentrates on the performative and expressive-symbolic dimensions of squadristi violence and their effects on bodies and social subjectivities.

This presentation, part of a continuing graduate student Research Seminar Series organized by the HGSA, is open to all students and faculty. This series is envisioned as a forum for advanced History graduate students to share their dissertation projects and research experiences with a wider audience. Please come!

Comments Off on HGSA Seminar: Alessandro Saluppo on Violence and Terror in Ferrara, Italy