History Major Katherine DeFonzo on Her Internship at the Smithsonian 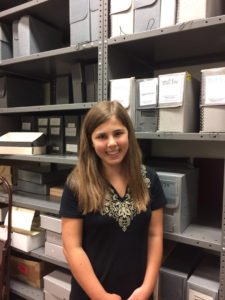 History major Katherine DeFonzo in the Archives Center at the Smithsonian in Washington, DC.

Earlier this summer, History major Katherine DeFonzo reached out to faculty member Christopher Dietrich about the work she was doing at her internship at the Archives Center at the American Museum of National History (a part of the Smithsonian Institution). Katherine wrote: END_OF_DOCUMENT_TOKEN_TO_BE_REPLACED 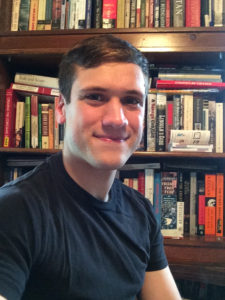 First up is Stephen Leccese, an American historian in the PhD program working with Professor Christopher Dietrich. Leccese has achieved the remarkable feat of publishing two journal articles virtually simultaneously. He wrote to tell us about both:

This article is a shortened version of my Master’s research paper, which Prof. Chris Dietrich advised. I became interested in progressivism in Prof. Dietrich’s American Political and Intellectual History since 1877 class, particularly on how the “robber barons” defended themselves against attacks from progressive muckrakers who exposed businessmen’s unethical practices. For a case study, it was natural to look at the Standard Oil Company, the most visible of the great trusts and the subject of muckraker Ida Tarbell’s classic The History of the Standard Oil Company. Since the Supreme Court successfully dissolved Standard Oil in 1911, historians have exclusively considered the company’s response to Ida Tarbell insufficient from a public relations perspective. Yet from what I saw, no historians had actually examined what the company did do. That was how I found my historiographical gap. I decided to go into the archives and tell the story of how Standard Oil and John D. Rockefeller attempted to recover their reputations with public statements, official histories, and some of the first professional PR agents in American history. When placed in historical context, this response was groundbreaking – the field of PR was in its infancy, so Standard Oil agents were largely making this up as they went along. Going further, I tied this small study to the Progressive Movement at large. In the Standard Oil case, progressives attacked a corporation, and that corporation defended itself by developing the PR field. This started a trend of other businesses following suit, and by the 1920s the modern public relations field was largely established. Therefore, I argue that the anti-business activities of the progressives inadvertently helped big business establish itself. The editor of the Journal of the Gilded Age and Progressive Era liked this provocative argument about progressivism, and it definitely helped get this article published.

This article began life as my first-year PhD research paper, where I examined how a new generation of American economists argued that consumer spending was key to economic growth, breaking from previous classical economics. After some revising, I presented the paper at the Growing Apart: The Implications of Economic Inequality Interdisciplinary Conference at Boston College in March, 2016. After the conference, the organizers contacted me and said that my paper was among a group that they would like to publish in a special issue of the journal Religions (the conference sponsor was the BC theology department, hence the journal choice). I accepted and expanded the paper into a peer-reviewed piece. In the article, I examine how the various crises of the late nineteenth century – namely economic depression and increasing labor unrest – showed a group of younger economists that economic inequality was harmful to the social fabric. They argued that greater equality would create a working class that had increased spending power, which would lead to economic growth and more stable class relations. My main sources were numerous economic publications and several archival collections that these economists left behind. After establishing this new theory of consumption, I trace how the New Economists tried to put their ideas into practice. Importantly, they formed the American Economic Association in 1885 with the intention of spreading their message among the economic community. I conclude briefly by showing that by the 1890s, the New Economists were influencing public policy by working with politicians – particularly, several directly advised Theodore Roosevelt, first when he was governor of New York and later when he was president. The overall claim is that mass consumption was an aspect of social reform, something that is typically not considered in histories of consumerism.

Thanks Stephen, and congratulations on your two articles!

What do historians do in the summertime? Postcard from Dartmouth The summer provides scholars with opportunities to get together and workshop their research at institutes, seminars, and symposia  intended to foster group discussions on discrete topics like theory and methodology. For students of American History, one of the best opportunities to meet and discuss their work is the Futures of American Studies Summer Institute. This year, students and faculty from Fordham were invited to apply to participate in the Dartmouth institute with support from the Fordham Graduate School of Arts and Sciences. Among the community of Fordham Americanists who participated was Glenn Hendler, Associate Professor and Chair of the English Department, who gave a talk entitled ““The Civil War and the Ends of the State.” Also among the Fordham delegation was History PhD student Stephen Leccese, who presented work in progress on nineteenth-century mass consumption and economic thought. Stephen sent us this postcard with details of his experience at the institute.

The best part was workshopping a paper at the Institute. We broke into seminar sessions of about 10 people each in the afternoons. Each day 2 or 3 people read a paper they were working on- it could have been a dissertation chapter, an article proposal, or anything else. I read “Nineteenth-Century Economic Thought and New Perspectives on the Rise of Mass Consumption,” a slight revision of the paper I worked on during our Research Colloquium. I got some very interesting feedback from people outside my field, since about 95% of the seminar participants were from English or Literary Studies departments. While I was skeptical about how helpful their comments would be, I was surprised at how interested they were in a work of history. They provided some great suggestions that I will certainly be adding into my paper as I work on it further. The Dartmouth campus at night

Overall it was a very welcoming environment. Highly accomplished scholars, early career academics, advanced and early PhD students all interacted together without any sort of hierarchy. Even though I was in a different discipline than most other participants and was also much earlier in my PhD work (most were several years in and working on their dissertations), all expressed legitimate interest in what I was working on.

Although there wasn’t much down time (we attended about 40 talks throughout the week, plus meeting with our seminars every afternoon), I did have a very nice dinner out with my seminar group after our last meeting. It was a chance to be much more casual around everyone after a week of pretty serious scholarly discussion. I plan on maintaining contact with several members of that seminar, both as colleagues and friends.

It was an educational experience because I’ve only studied history since I started college. There were very clear methodological differences between myself and the rest of the participants. Though I don’t agree with all of the methodologies from Literary Criticism, I very much appreciated the chance to see these scholars in action. It gave me a view of something I’d never seen before.

Comments Off on What do historians do in the summertime? Postcard from Dartmouth