On April 24th and 25th, the History Department sponsored the Medieval England Conference that showcased the research done in the Graduate ProSeminar Course led by Dr. Maryanne Kowaleski. This conference included papers by members of the History Department, as well as the Center for Medieval Studies. Patrick DeBrosse, Rachel Podd, Amanda Racine, and Ron Braasch were the 3 doctoral and master’s students, respectively, that presented their research. See a list of all the presentations, as well as some pictures, below. END_OF_DOCUMENT_TOKEN_TO_BE_REPLACED

In the Fordham History Department the month of August is often a quiet time, but the department came back to life with excitement as two doctoral students defended their dissertations after years of research, writing, and revision. The History blog congratulates Elizabeth Kuhl and Jonathan Woods, who both successfully defended in the past few weeks. END_OF_DOCUMENT_TOKEN_TO_BE_REPLACED 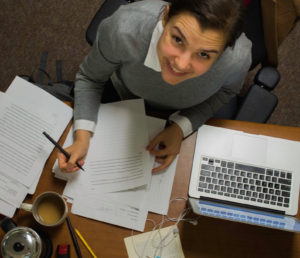 Louisa’s work puts two heretical tracts from fifteenth-century England into their social and religious context. These two tracts were likely written as part of a series of debates over bible translation that took place at Oxford in the late fourteenth century, sparked by the reformer John Wyclif. His ideas and the English bible produced by his followers were both condemned as heretical by Archbishop Arundel in 1407, but, as Louisa’s work shows, interest in and desire for an English bible continued through the end of the fifteenth century.

The story of how Louisa came to write this piece is a tale of true interdisciplinarity, and it underscores the dynamic nature of medieval studies at Fordham. Louisa found these tracts, one of them previously unknown to scholars, during a manuscript studies class led by Dr. Susanne Hafner that she took in the first semester of her master’s degree at Fordham’s Center for Medieval Studies. She subsequently presented a talk about the tracts at a conference organized at Fordham by J. Patrick Hornbeck II of Fordham’s Department of Theology and Michael van Dussen of McGill University, and her work was published in the peer-reviewed edited collection of papers that developed out of that conference. Louisa’s archival research on the owners of the tracts during summer 2014 led her to develop a dissertation project that explores the tastes and self-construction of yeomen in late medieval England, a project that has been generously funded by Fordham’s History Department and the Graduate School of Arts and Sciences.

Congrats, Louisa! We look forward to reading about more exciting discoveries from the archives.