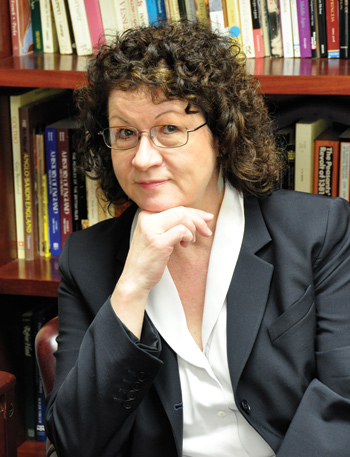 At the annual Faculty Day Dinner on February 2nd to celebrate the contributions of members of Fordham’s faculty the History Department’s own Dr. Maryanne Kowaleski was honored with the Award for Excellence in Graduate Teaching and Mentoring. The award was presented by Dr. Eva Badowska, Dean of the Graduate School of Arts and Science, whose citation drew on comments by Dr. Kowaleski’s colleagues and graduate students.

END_OF_DOCUMENT_TOKEN_TO_BE_REPLACED On Friday at the University’s annual Faculty Day, Professor John Harrington, Dean of the Faculty of Arts & Sciences, presented History Professor Kirsten Swinth with the award for outstanding teaching in the Social Sciences. Dean Harrington’s citation mentioned her her broad range of skills and interests, including the history of women and painting, her experiences working in education abroad, particularly in Mozambique, and work organizing teaching events outside of the classroom. The History Department could not be more proud of Professor Swinth: Congratulations!

END_OF_DOCUMENT_TOKEN_TO_BE_REPLACED

Comments Off on Congratulation to Kirsten Swinth, Winner of Social Sciences Teaching Award The History Department is proud to announce that in 2015-16, Dr. Durba Mitra will be the Andrew W. Mellon Postdoctoral fellow at the Penn Humanities Forum and the University of Pennsylvania. The theme for the 2015-16 Penn Humanities Forum is “Sex.” Mitra will be working on her book manuscript, tentatively entitled “Sex and The New Science of Society in Colonial Eastern India.” In her book, she explores the significance of female sexuality to the making of social thought in the late nineteenth and early twentieth centuries in eastern India. The book explores how colonial authorities and Bengali intellectuals invoked claims to “scientificity” about female sex in the constitution of new legal codes, modes of evidence, and social theories about Indian society. You can read more about her research plans here. Congratulations on this exciting fellowship, Dr. Mitra!