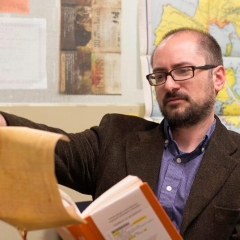 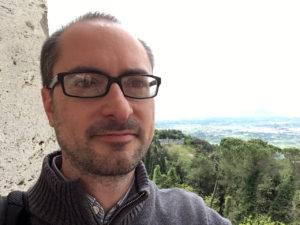 Postcard from the Archives: Jeffrey Doolittle

We received a postcard from PhD student Jeffrey Doolittle updating us on his year as a Fordham University GSAS Research Fellow: 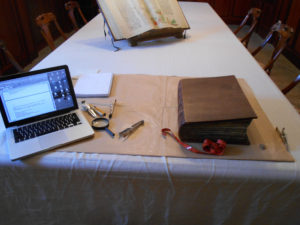 A medievalist at work: Jeff’s workplace in the reading room at the abbey of Montecassino

Throughout this past spring, I have been happily ensconced in Italy conducting research for my dissertation. I am currently exploring the medical culture of the Benedictine abbey of Montecassino in the ninth-century through a study of one of its products, Archivio dell’Abbazia, Codex 69, a project that requires an extensive codicological and paleographical analysis of a small corpus of manuscripts written in the Beneventan script. Thanks to a GSAS Research Fellowship, I was able to visit a number of archives in Northern Europe last fall; this spring and summer, I spent most of my time in Cassino researching at the Archivio dell’Abbazia of Montecassino under the patient guidance of the archivist, Don Mariano Dell’Omo. St. Benedict’s famous monastery, of course, is located at the top of a mountain, and the archive is also only open in the morning when buses do not run. So I woke up especially early and hiked up every day, a trip that ordinarily took about 1.5 hours. Fortunately, and in the spirit of Benedictine moderation, I did not have to walk both ways; there was a bus to come back down. 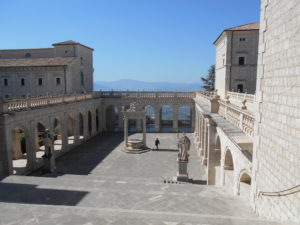 When not at the Archive, I was able to make use of the resources of the “Laboratorio per lo studio del libro antico” at Università degli Studi di Cassino e del Lazio Meridionale and its incredible digital library of medieval manuscripts, and I remain especially thankful for the expertise and kind assistance of the curators of the laboratory, Drs. Lidia Buono, Eugenia Russo and Stella Migliorino. Using Cassino as a base, I have also been able to visit the Biblioteca Medicea Laurenziana (Florence), the Biblioteca Casanatense (Rome), the Biblioteca Apostolica Vaticana (Vatican City) and the Biblioteca Nazionale in Naples.

Since July 1, I have moved on to the United Kingdom where I will deliver a paper at the International Medieval Congress at Leeds. I will also visit a few additional archives in the UK and Ireland including the Hunter Library in Glasgow, before returning home by the end of July.

Thanks for the postcard, Jeff. We look forward to seeing you when you’re back and hearing more about your research and archival discoveries.

Comments Off on Postcard from the Archives: Jeffrey Doolittle