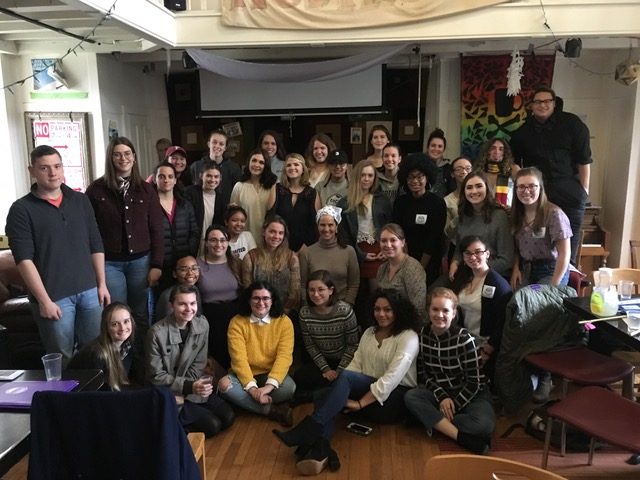 On November 7, 2017, Fordham students gathered for the second annual women’s liberation teach-in at Rodrigue’s Coffee House, on the Rose Hill campus. Part of Professor Kirsten Swinth’s Modern U.S. Women’s History, students in the teach-in emulated women’s liberation groups of the 1960s and 1970s. The teach-in is a valuable tool Dr. Swinth has used to move students from the pages of their textbooks into the lived experience of the subjects they study. Here’s what some of the students had to say about that experience. END_OF_DOCUMENT_TOKEN_TO_BE_REPLACED

The History Department is excited to announce our lineup of Fall Courses for 2016. As always, the courses reflect the depth of expertise of our faculty and the rich variety of themes and perspectives on offer in our program. The full complement of six courses in Medieval, Early Modern, Modern European, and US history (with one course offering a global perspective on US history) is designed to provide all of our students with opportunities to pursue periods, areas, and subjects of interest to them. Medievalists can begin their year-long proseminar/seminar sequence, while other students identify topics and mentors for their final research papers.

Students should remember to contact the director of graduate studies before making their selections.

One of our newest faculty members, and the department’s first Shvidler Chair in Judaic Studies and director of Jewish Studies at Fordham, Magda Teter presents her first graduate course at Fodham in Fall 2016.

Modern historiography, including Jewish historiography, and history as an academic discipline are products of modern national movements. The narratives they produced provide tools for shaping national and ethnic identities in the modern era, and had long lasting ramifications not only for the study of history but also for the inclusion or exclusion of specific groups in modern European societies. This course will explore how the writing of history has been linked to the larger questions of national identity, and nationalism, and to questions of political inclusion and exclusions. We will read the early Jewish historians of Germany, Poland, and Palestine/Israel and explore how their visions of premodern Jewish history were shaped by larger questions that were also occupying other European historians and intellectuals.

Professor Salvador Acosta is another history faculty member with a new book out:  Sanctioning Marriage: Interethnic Marriage in the Arizona Borderlands. As the title implies, Professor Acosta is a leading authority on the history of the US and its borders, especially with Latin America. As the description of his course explains,

This course explores the concept of the borderlands, i.e., the political and geographic spaces where groups of people meet and interact. Individuals enter these areas with acquired cultural and ideological backgrounds that undergo transformations as they encounter different customs and worldviews. The course focuses on United States and Latin American history, in particular, on the roles of nation building and its concomitant identity construction. It uses various categories of analysis, such as race, gender, and hegemony, to discuss the interaction among groups of people as they meet along political and geographic borders.

Professor Rosemary Wakeman is the director of Urban Studies at Fordham, who has published on the history of French cities, including books on the cities of Toulouse and Paris and is currently working on the history of the New Town Movement.

This course concentrates on theoretical and interpretive approaches to the study of the city and urban life. It considers the transformation of urban space and culture from the eighteenth century to the present during which commercial capitalism, industrialization, and massive human migration remade basic social and cultural relationships. Among the key factors of investigation are class and mass culture, gender, production and consumption, accumulation and cultural display, architecture and planning, and the evolution of urban space and topography.

Professor Maryanne Kowaleski is the former director of Medieval Studies at Fordham and former President of the Medieval Academy of America. Fresh from a year’s research leave at the Radcliffe Institute for Advanced Study, Professor Kowaleski will offer the medieval elective course covering the critical areas of social, economic, and gender history.

This course surveys recent historiography on the roles and status of women in medieval society, as well as the structures and dynamics of medieval families.  Among the debates to be explored are the effect on medieval society of the Christian Church’s teachings on virginity, sex, and marriage, and the influence of geography (northern vs Mediterranean Europe), environment (village, town, and convent), and status (noble, bourgeois, or peasant) on the work, family role, and authority of women. Chronologically the course will range from the early Christian period to the Renaissance. Recent scholarly work on nuns, mystics, and beguines will be examined, and readings will also cover different approaches to the study of women and family, including the methodologies of literary scholars, demographers, feminists, and legal historians.

When he is not wearing the hat of Director of Graduate Studies in the History Department, Professor Nicholas Paul is a historian of the medieval aristocracy, the crusades, and medieval political culture. In 2016-7 he will offer the Proseminar/Seminar sequence, a year long course that allows medievalists a full semester to master the historiography on a given topic. With the topic and extensive background reading in hand, students will spend the Spring semester conducting research and writing their final papers. The course description explains:

This course, the first part of a two-semester proseminar/seminar sequence will introduce students to recent debates and different approaches to cultures of power and political processes in western Europe in the central middle ages. Among the many topics we might consider are: lordship, status and the sources of political authority; the origins and significance of consultative assemblies; the rituals and rhetoric of courtliness and persuasion; the relationship between rulership and sanctity; and the rise of accountability. Through in-class presentations and discussions, students will become familiar with a wide range of source material, from diplomatic and documentary collections to historical narratives and courtly literature.

Comments Off on Graduate Courses in History, Fall 2016